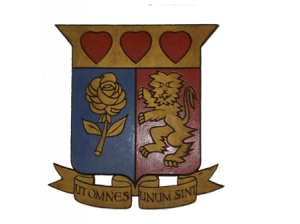 THE STRATHMORE COAT OF ARMS

The Strathmore Coat of Arms is full of meaning.

The lion is the symbol of strength, power, courage of determined fight for excellence and justice. It also represents Kenya, our country, which has all the qualities mentioned above.

The Rose in full blossom represents, love, the source of all good desires and actions, even if at times it requires loving sacrifice, represented by the thorns the rose shows in its stem. The rose has some supernatural meaning. Love, in capital letters, is love of God. And also it has some historical meaning associated with the life of Blessed Josemaria who inspired and encouraged those who started Strathmore: He received a sign by means of a wooden gilded carved rose in a very trying moment of his life.

The Three hearts represent the three races which, in 1961 when the School started, were segregated in the colonial system of education. The heart represents the person, since it is taken as the source of all our actions, and the source of love. Being the three hearts of the same colour it shows the radical equality of all people. At the beginning it clearly meant the unity sought of the three major races. These days it means the co-operation of parents, teachers and students towards the same aim.

The motto “Ut ommnes unum sint” is in Latin. It is a quotation from a passage of the Gospel, and translated means “That all may be one”. It expresses the desire of working together towards the same aim, in spite of individual legitimate opinions, preferences and tastes.